I’m very excited to announce that my book of logic puzzles, including 25 “cryptic” or puzzlehunt-style puzzles, has been published! 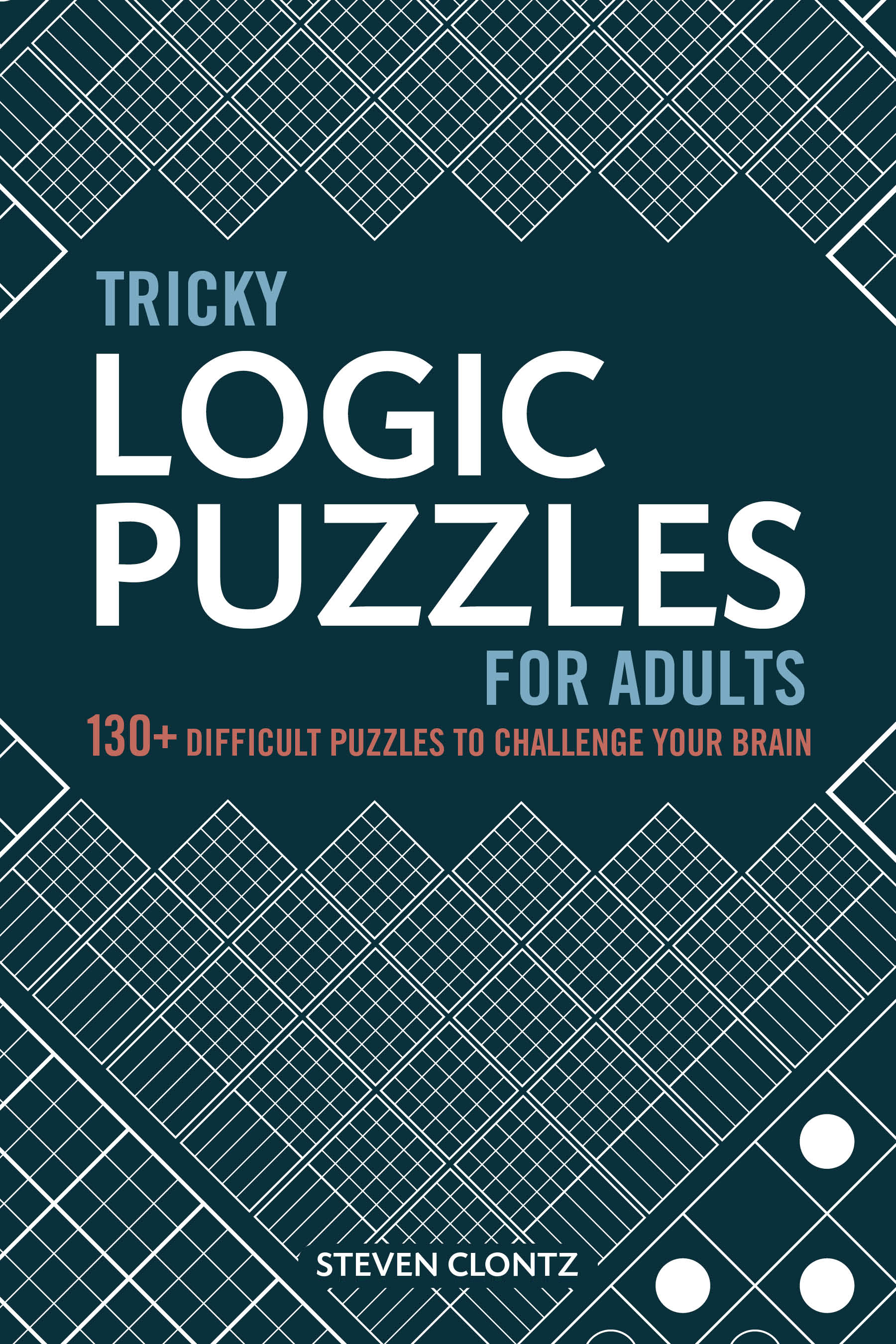 It will be available on Amazon and wherever else books are sold.

Thanks to Andrea Blumberg, Bryan Clair, Phillip Clontz, Tracy Cobbs, Jenn Dumont, Julie Gaddy, Steve Gaddy, Eric Harshbarger, Charles McPillan, Erin McPillan, Trent Webb, and my wife and daughter for their support in the writing of the book. And special thanks go to Andrea, Bryan, Eric, and Jenn for letting me adapt four great puzzles of theirs for the book!

As the release date approaches, I’ll be sharing some of the kinds of puzzles I hope you’ll enjoy in the book.

First up, here’s a nonogram, also known as color-by-number or Picross. The puzzle below was one of a few cut from the final manuscript to get the page length (and price!) down, but hey, that means I can share it here instead! Here’s an excerpt from the book explaining them, and a completed example from Wikipedia.

Nonogram puzzles are known by a wide variety of names: Picross, Paint-By- Number, Griddlers, Logic Art, and many more! Solving (and designing!) puzzles are a particular joy, because rather than the final answer being an arbitrary grid of numbers or symbols, the end result is a pixelated image. Half the fun is figuring out what you’re drawing as you solve.

In a nonogram, each cell of the grid will either be left blank, or filled-in. To solve, consider the numbers at the boundaries. Each number represents a continuous block of filled-in squares, ordered top-to-bottom or left-to-right.

Calcudoku puzzles, also known under the (trademarked) name KenKen, are a fun blend of logic and arithmetic.

A Calcudoku puzzle uses the numbers 1 through 4 for a 4 by 4 puzzle, 1 through 5 for a 5 by 5 puzzle, and so on. Like Sudoku, each row and column must contain each of the numbers for the puzzle exactly once (creating what mathematicians call a Latin square). But since, unlike a Sudoku puzzle, none of the numbers are provided, you’ll need to use logic to place the numbers in each cell according to the clues given in each “cage”. Addition \((+)\) or multiplication \((\times)\) clues describe the sum or product of the caged numbers. Subtraction \((-)\) or division \((\div)\) clues describe the difference or quotient of the larger number by the smaller number in the cage (which always has two cells). Numbers can be repeated within a cage, as long as they don’t share a row or column.

Since the below example is a \(7\times 7\) grid, it should be filled using the numbers 1 through 7. The book contains Calcudoku puzzles between \(4\times4\) and \(8\times8\). To print and enjoy, the below image links to a PDF. 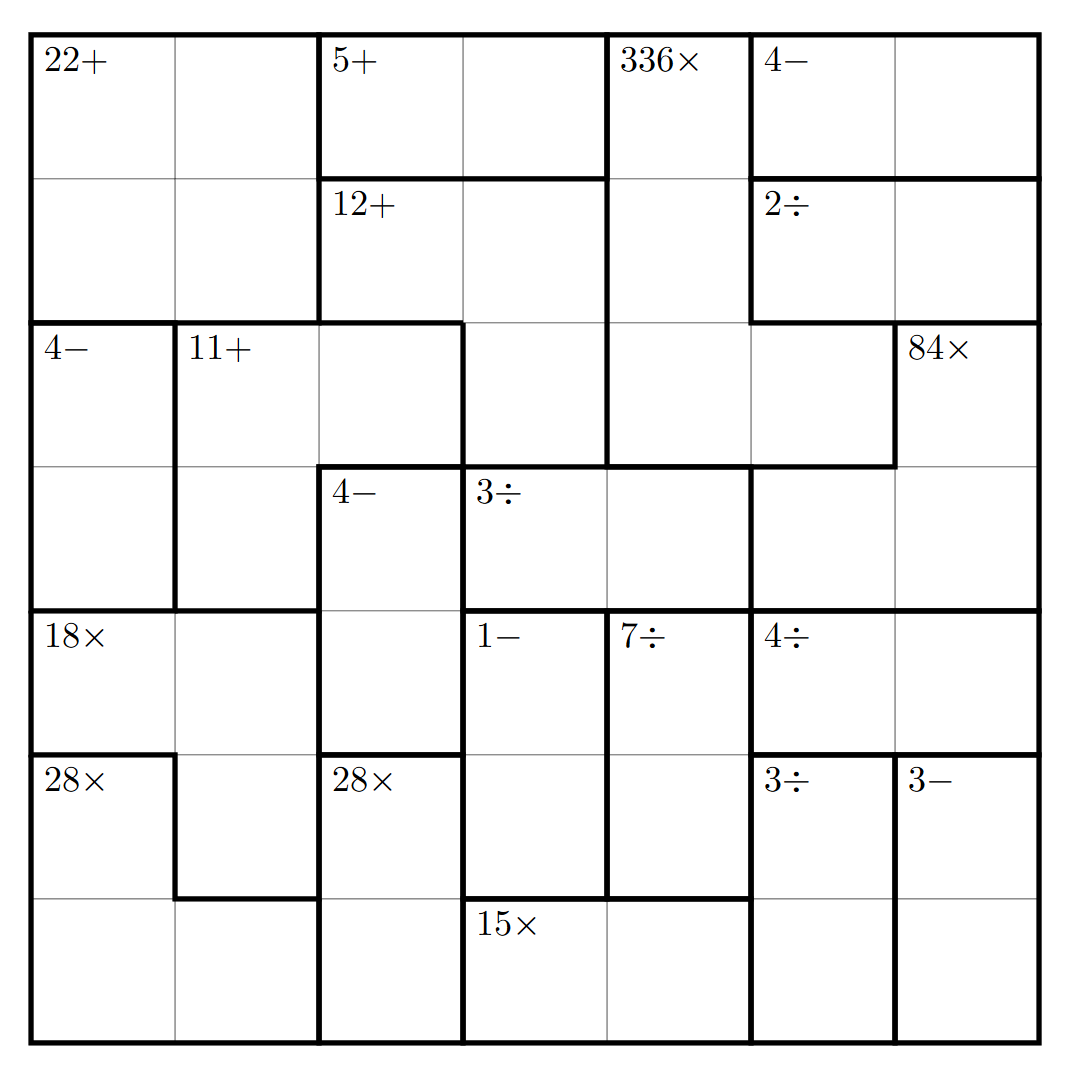 I couldn’t resist including a few classic logic grid puzzles into my book!

Logic Grid puzzles are perhaps the purest type of logic puzzle, since no explanation of the mechanics is necssary. All you have to do is use logic to figure out the relationships between the various people or items being discussed.

But don’t let that fool you into thinking they are easy! That’s where the grid comes into play. Using it, you can make notes on the relationships between each pair of properties, ruling out the impossible until only the possible remains.

Five neighbors, conveniently named Alice, Bob, Carl, Diana, and Eve, live in a row of five houses of different colors, with different pets, and preferring different beverages. Using the clues below, can you determine who is who?

The grid below links to a nifty web app that you can use to help solve the puzzle. There’s even an option that will help autofill the grid if you’d like some extra help (“Draw Conclusions”), or you can leave it all up to yourself (“No support”). 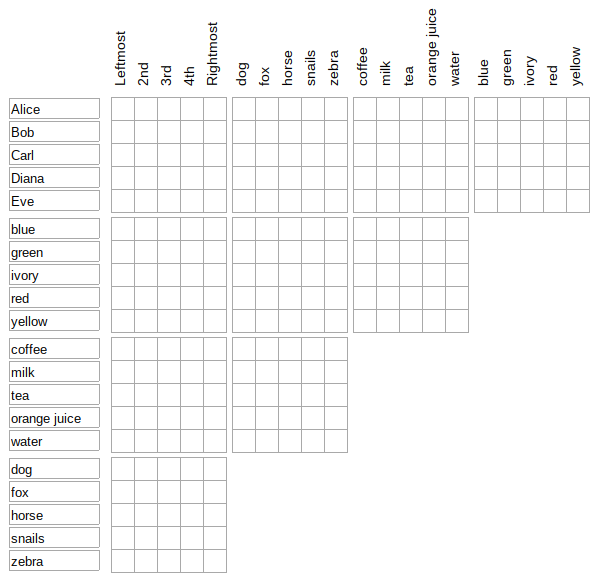 Are you allowed to write a book of logic puzzles without Sudoku? I’m not sure you can. I certainly didn’t!

In case this is your first experience with this popular puzzle format, the rules are simple: fill in the numbers 1-9 within the grid so that each number appears exactly once in each row, column, and 3x3 subsquare. 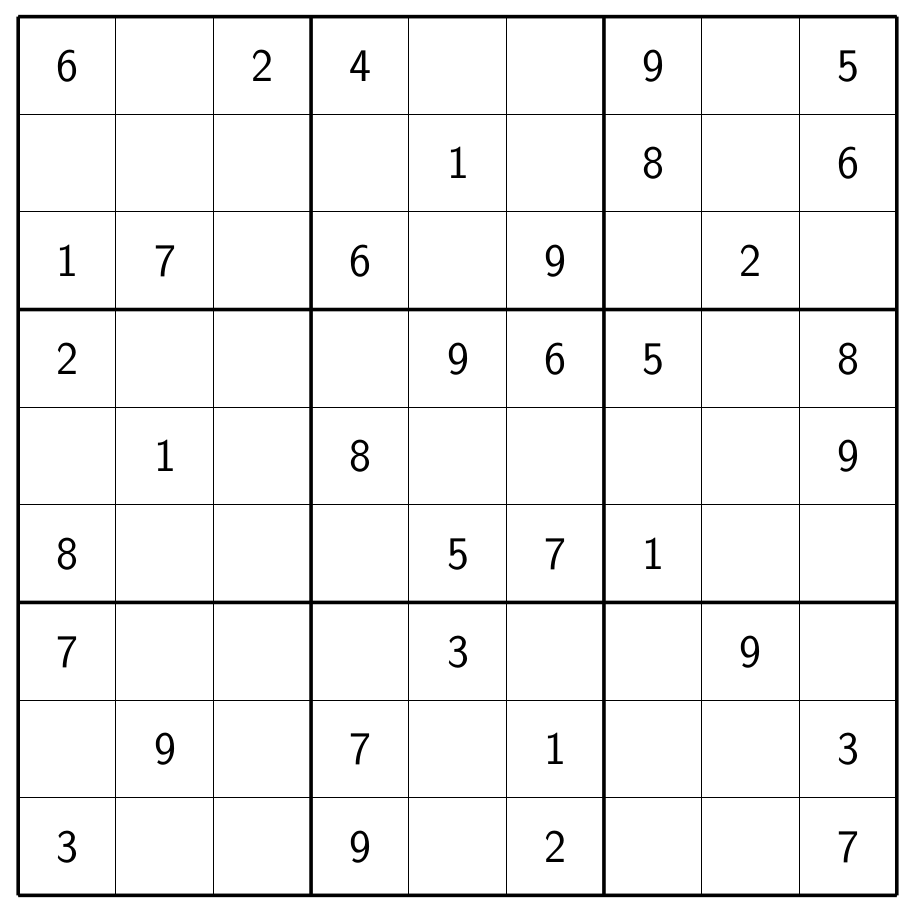 While I’ve worked with all the other puzzle types for a long time, to be honest I’m a very recent Masyu solver! And boy was I missing out – these challenges are a lot of fun!

The task at hand is to draw a single cycle of horizontal and vertical lines that passes through each box that contains a circle. Lines that pass through black circles must do so at a 90° angle, but must pass straight through both adjacent squares. On the other hand, lines must pass straight through white circles, but must turn 90° through one adjacent square (or possibly both). Not every square of the grid must be passed through.

Of course, they say a picture is worth a thousand words. A printable puzzle is available through the picture link below. 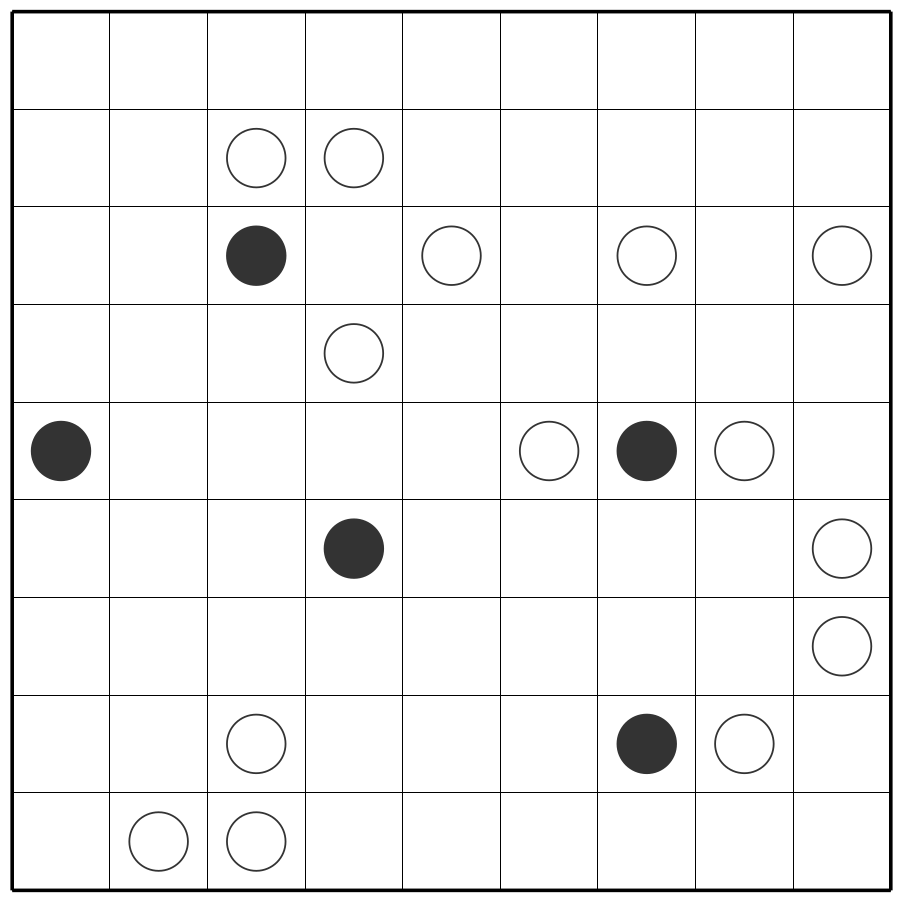 In my teaser cryptic puzzle, you’ll want to think about both Sudoku and Masyu, and use the common encoding of A=1, B=2, etc. to discover the hidden 5-letter English word. 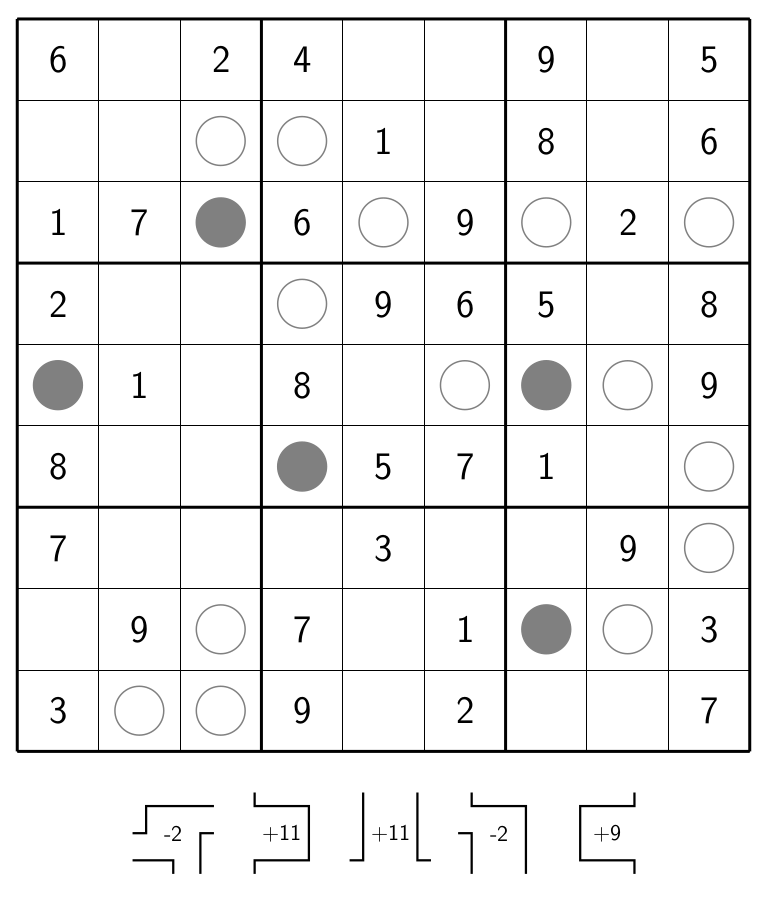 Sometimes typos and mistakes sneak past you! We’ll be correcting any errors we find for a future printing, but in the meantime I’ll document them here. Of course, be wary of spoilers below.